Along the old Via Aretina that ran between Florence and Arezzo, in the vicinity of an ancient spring, a little spedale, a hospice where travellers and pilgrims could rest on their journey, was built in the early 13th century at the expense of its benefactor, Dioticidiede di Bonaguida del Dado. It is the Spedale di Santa Maria a Fonteviva, named for the nearby spring, or Bigallo, a term whose origin is unknown. Managed by the Florentine Compagnia Maggiore del Bigallo starting from 1245, in the late 15th century the hospice became a cloistered convent. The structure was radically remodelled and surrounded by high walls, while its hospitality function was almost entirely abandoned. The Spedale having been officially closed in 1754, and the convent supressed under the Napoleonic government (1808), the building was converted into a civic residential structure, bought by the Municipality in 1920. It was gradually abandoned until 1978, when some work was done on it, but its first real restoration began in 2000. The great hall/refectory with its coffered ceilings, the dormitory with traditional wooden box beds and the monumental kitchen have been restored to their former splendour. Converted into a hostel, the building has regained its original purpose. From its windows and terrace, the Spedale offers a splendid view over the Tuscan landscape as far as Florence. 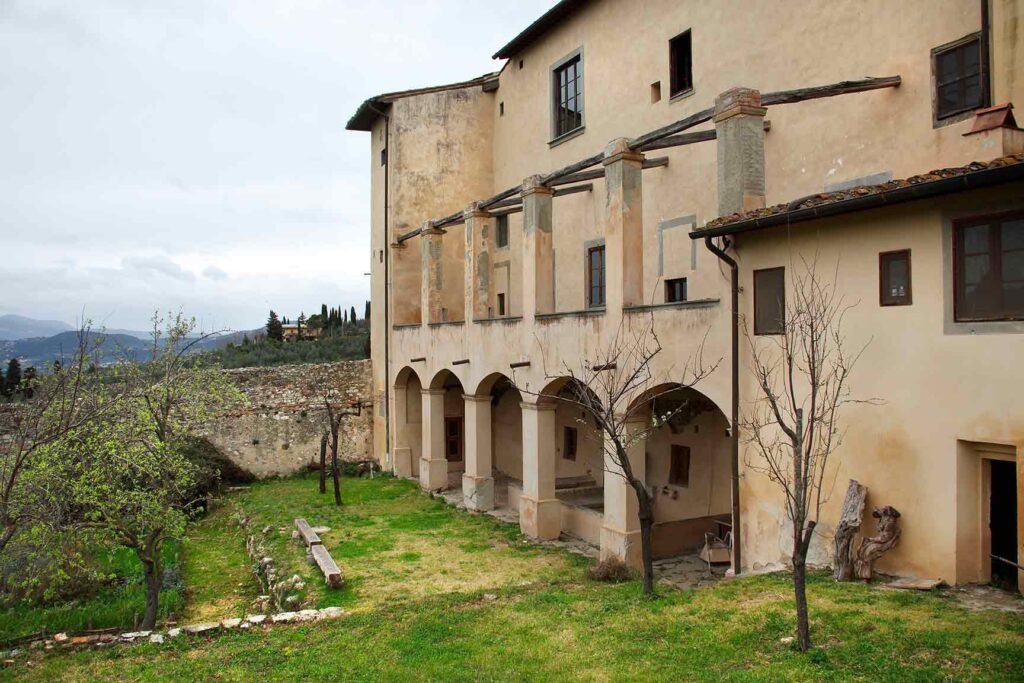 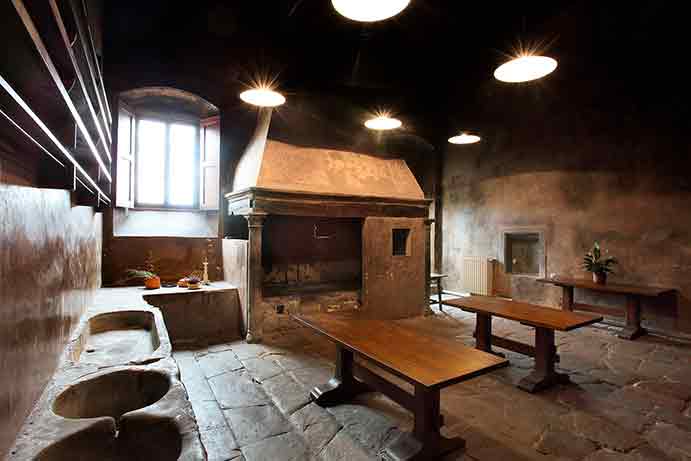 The Fonte della Fata Morgana is a curious little building erected in 1571-74 by Giambologna for Bernardo Vecchietti. It originally belonged to the Villa Il Riposo, famous for Raffaello Borghini’s treatise (Il Riposo, 1584). Built like a theatrical backdrop with two adjacent facades overlooking a little clearing, the nymphaeum seems to exude an atmosphere of magic. Inside is a fountain shaped like a seashell in pietra serena, supported by a rough-hewn base whose zoomorphic form suggests a siren’s tail. The water, overflowing the stone basin, cascades into the hexagonal pool beneath it. In the past, it flowed around the Fata Morgana, a sculpture carved especially for this place by Giambologna. 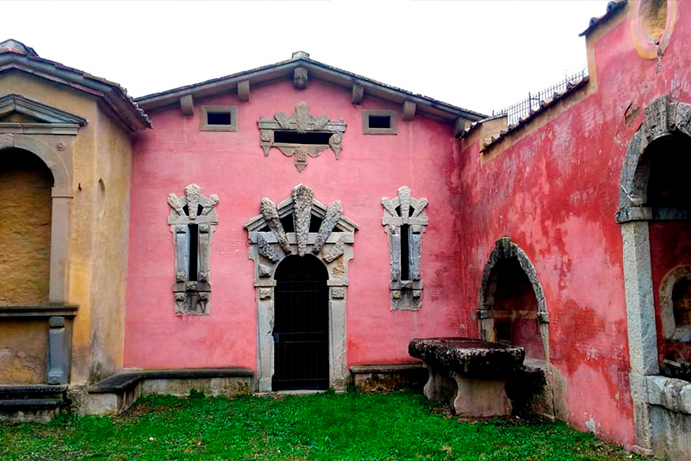 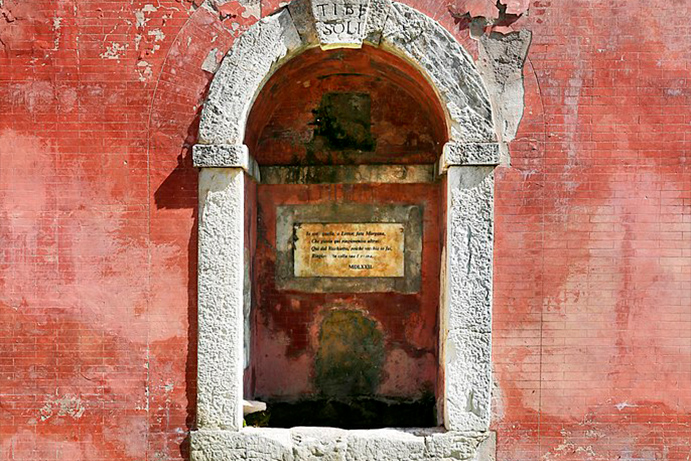 Excavations in Via della Nave

In the Eighties, archaeological excavations conducted in several stages around Via della Nave, in the town centre, brought to light complex multi-layered structures. Although dating mainly from the time of Imperial Rome, from the Augustan Age to the 3rd century A.D. in particular, they occupied an area that had been inhabited since at least the 3rd century B.C. The structures unearthed included some parts of a Roman building with a rectangular chamber terminating in an apse, and a great roofed water channel in opus reticolatum, with brickwork arches and ceilings. Among the movable items were numerous numismatic finds; especially valuable was a group of drinking glasses, some having a monetary stamp imprinted on the bottom. The area was most likely part of a real city, which must have occupied some of the site of today’s town. 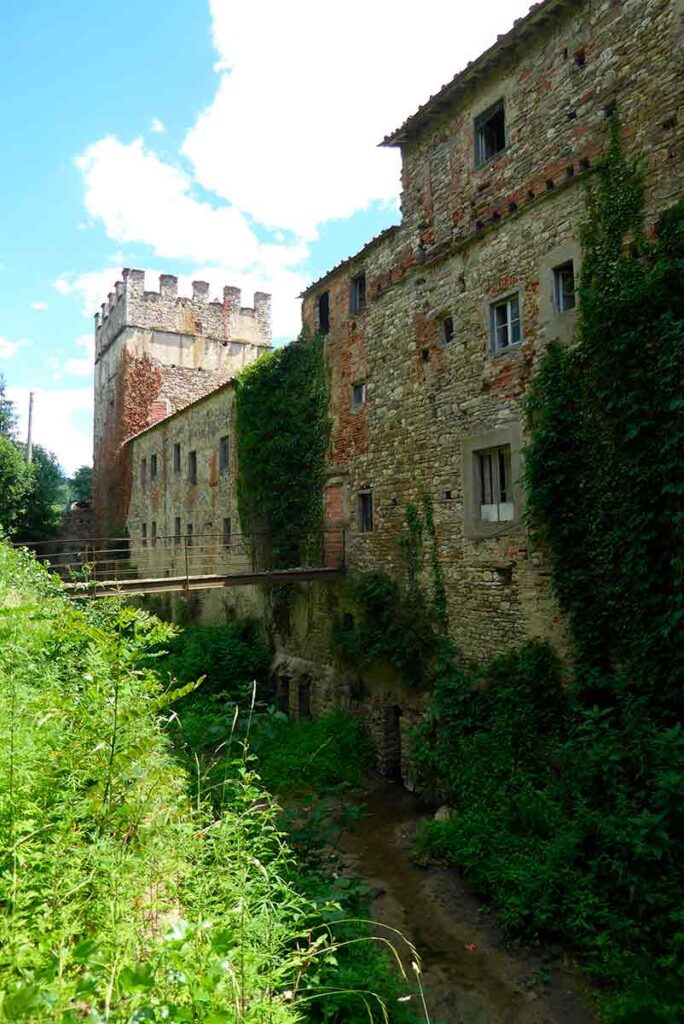 On the left bank of the Arno, upstream of Florence, stands a majestic building with imposing walls and crenelated towers: the Gualchiere di Remole. It is the last intact testimonial to the numerous workshops built along the banks of the river in the Middle Ages, to exploit the motive force of water. Built in 1326 by the powerful Albizzi family and used to transform fine wool into expensive textiles (the walls served to protect it!), it is named for the processing of woollen cloth and for the Pieve di Remole, on the opposite bank of the river. Managed by its founder’s heirs for two centuries, the Gualchiere was bought by the Wool Merchants’ Guild in the 16th century, acquired later by the Chamber of Commerce, and lastly by the City of Florence, which still owns it today. The Gualchiere and the village remained intact up to 1944, when German troops destroyed both of the doors in the walls. It was damaged still further by the flood of 1966. Some of the mills, however, remained in operation up to the early Eighties. For years now the Gualchiere has lain in a state of abandonment, although it is a unique example of late-medieval industrial structure, recording a time when Florence triumphed in trade, finance and culture.

• Address: Reached from the Strada Provinciale di Rosano, in the Rosano locality
• Opening Hours: Visible from the outside 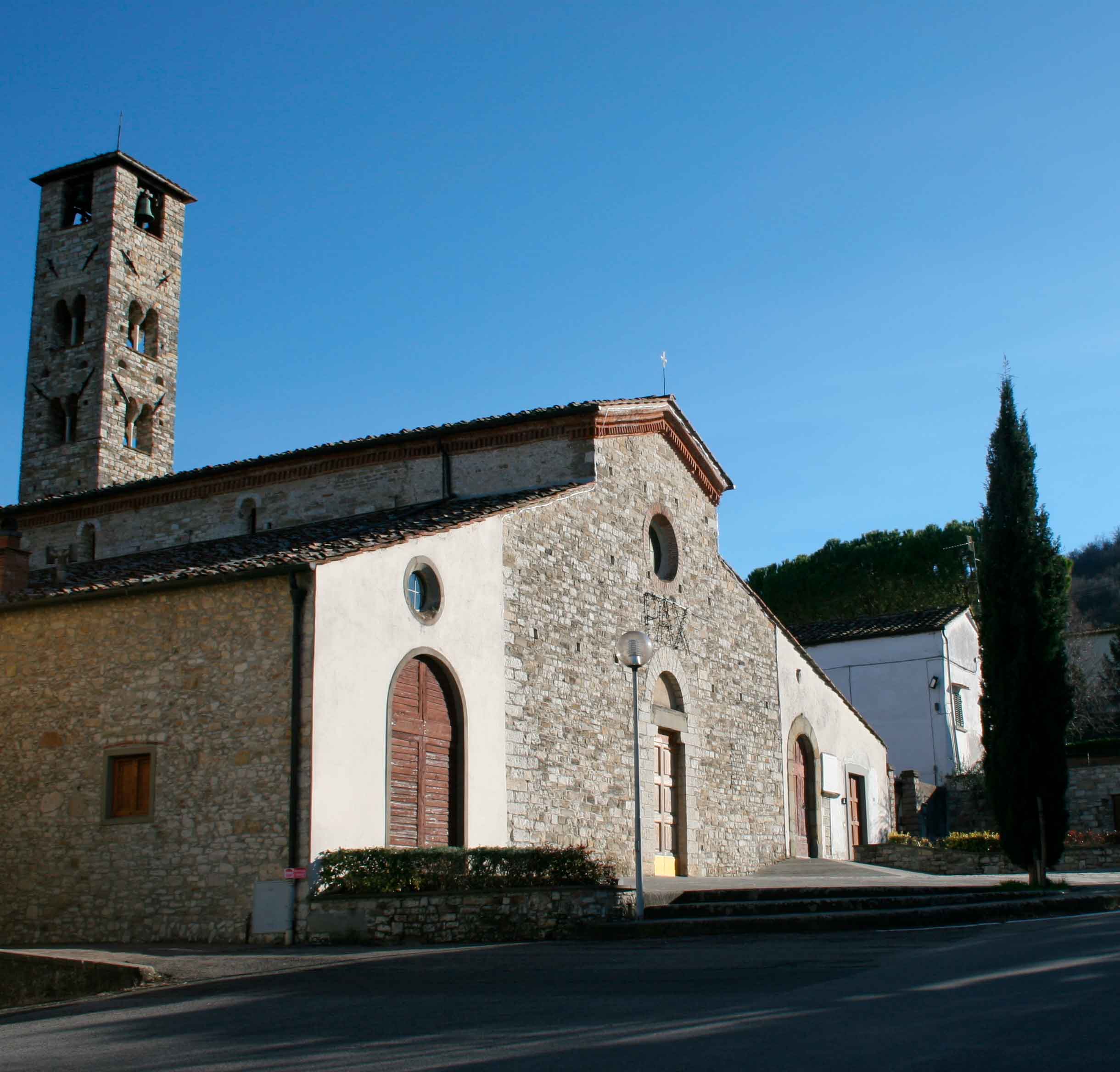 The Villamagna quarter grew up around the splendid Pieve dedicated to the Martyr Donnino. Probably founded in the 8th century, it is mentioned for the first time in a document from the 11th, an epoch consonant with its Romanesque style, despite renovation conducted over the course of the 14th century and thanks to restoration in 1930 that stripped away its baroque decorations. The exterior is distinguished by a simple facade in alberese stone and an elegant bell tower with three levels of mullioned windows. The interior is divided by round arches into three aisles, the central one terminating in an apse. Over the course of the 15th century, the austere interior was brightened by frescoes attributed to the Master of Signa along with other paintings. In 1394 Mariotto di Nardo painted a triptych depicting a Virgin and Child among Saints and Angels. An elegant panel painting on the same subject is attributed to David Ghirlandaio. The Confraternita di San Donnino commissioned the painting of the Virgin and Child with St. Donnino and the Blessed Gherardo, by Francesco Granacci, who was born here at Villamagna in 1477 and was a fellow apprentice of Michelangelo in Ghirlandaio’s workshop. Since 1979, the remains of the Blessed Gherardo da Villamagna have reposed in an urn below the main altar.