Greve in Chianti grew up along the road that ran beside the Greve stream, as a marketplace for farmers from the surrounding hills. Converging on the marketplace of Greve, centring on the picturesque triangular piazza still surrounded by porticoes, were the interests of several nearby towns, such as Montefioralle, Panzano, Lamole and Lucolena. This territory, dotted with villas, castles and ancient farmhouses, is now a destination for international tourism. Many of the medieval castles and manor houses have been converted into villas and farms, such as Uzzano, Vicchiomaggio and Mugnana, and Verrazzano, the family home of the navigator Giovanni. Facing on Piazza Matteotti, still today fulcrum of the town’s public life, is the Town Hall of Greve and, at the far end, the recotory di Santa Croce. 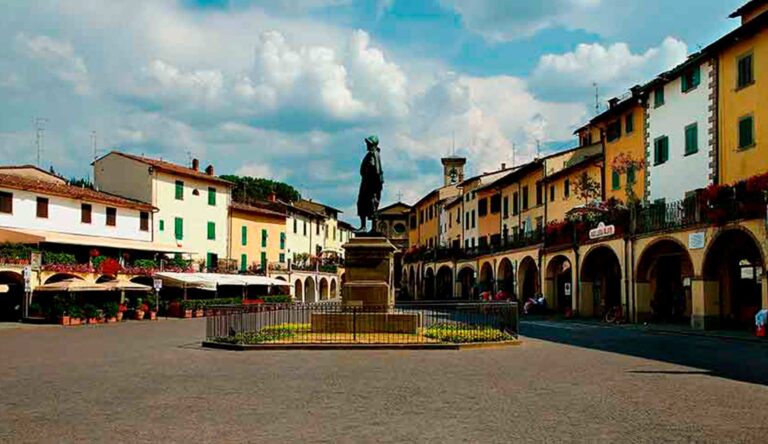 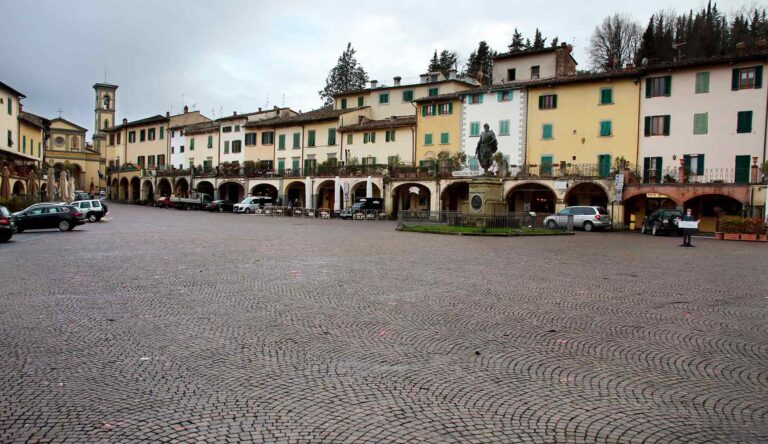 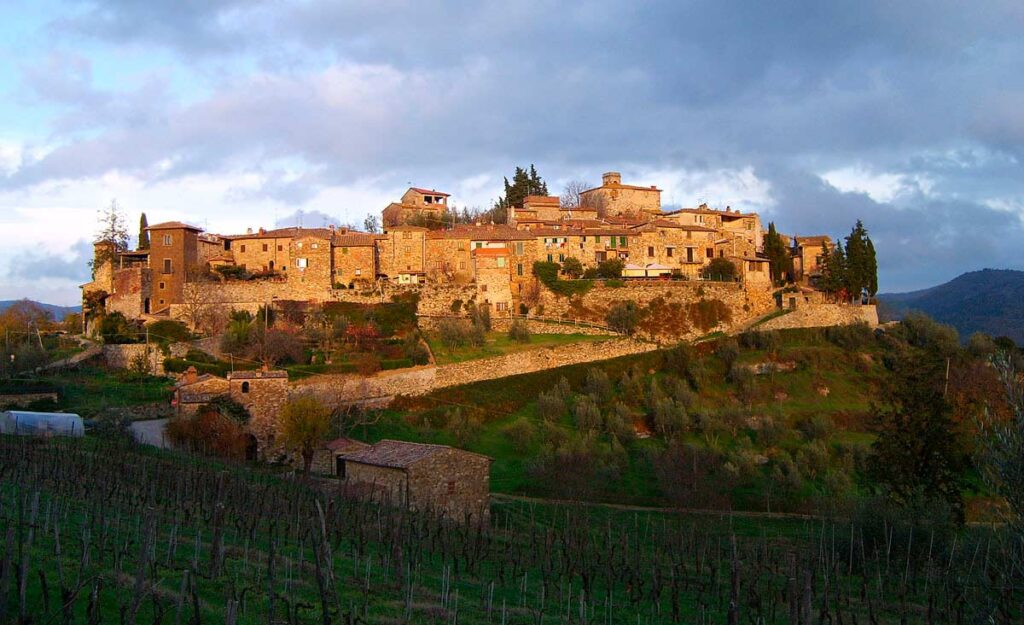 Since 2019 this castle has been listed among the most beautiful towns in Italy. Known in the past as Monteficalle, it became Montefioralle in the 18th century. The earliest record of it dates from 1088, when a deed was stipulated in thecastro Monteficalli. The castle and its village were owned by different families At various times: the Ricasoli, the Benci of Figline, and the Gherardini of Montagliari. The place was important insofar as it stood along the Via del Guardingo di Passignano, an ancient road that linked the three main valleys in the Florentine southern countryside – Val d’Elsa, Val di Pesa and Val di Greve – with the Upper Valdarno. The town grew up in the shape of an ellipse around the highest part, the old feudal settlement. Most of the walls (late 13th-early 14th century) are still standing today, with their three gates and the remains of some towers converted into apartments.

In 982, the records of the Badia di Passignano mention a Pieve di San Leolino a Flacciano, but its origins are probably even older, as suggested by the two sandstone slabs decorated with motifs typical of the 8th-9th century now found in the church. In the 12th century the building was remodelled in Romanesque style. It became known as San Leolino a Panzano, named for the nearby castle. The Pieve contains numerous artworks, including a triptych attributed to the Sienese artist known as the Master of Panzano, and a splendid painting by Meliore di Jacopo depicting the Virgin and Child with St. Peter and St. Paul and their Stories. Over the main altar is a triptych by Mariotto di Nardo representing theVirgin and Child with Saints, coming from the Oratorio di Sant’Eufrosino. At its sides are two glazed terracotta tabernacles attributed to Giovanni della Robbia (c. 1515). On the inner façade, a frescoed Baptism of Christ in the manner of Raffaellino del Garbo surmounts the 16th-century baptismal font. 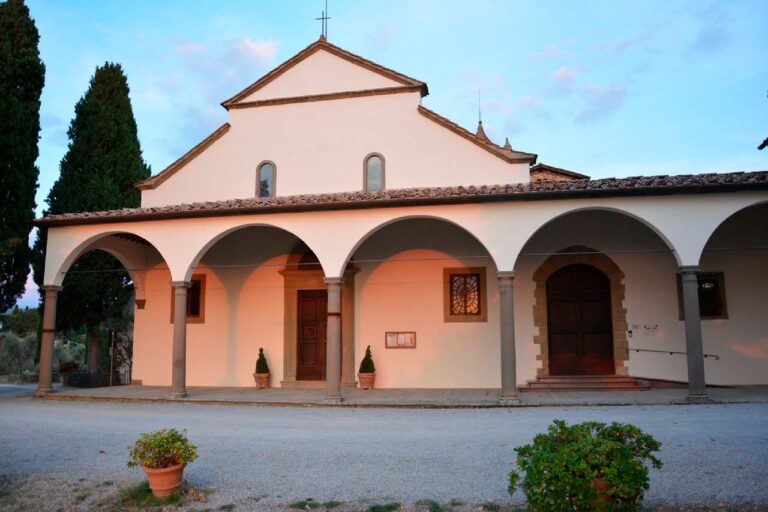 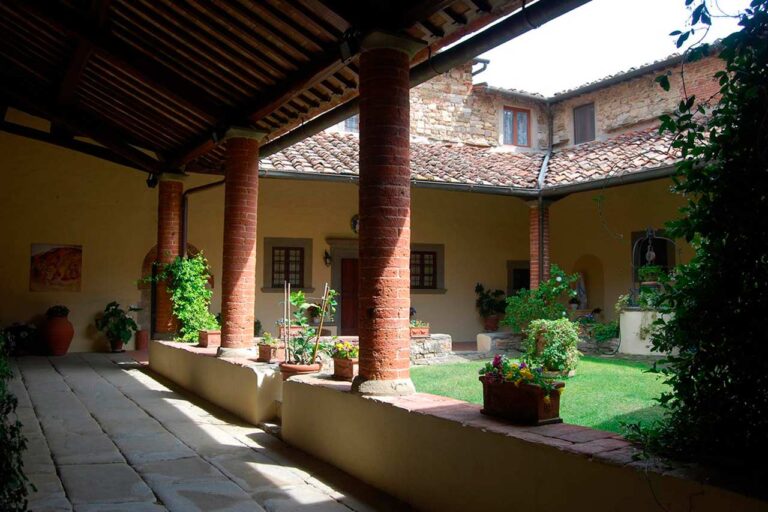 Tradition has it that the oratory was built over the tomb of the Saint, who lived and died here, probably around the 7th or 8th century A.D. and is thought to have evangelised the Chianti territory. The oratory, whose current aspect dates from the 15th century, is mentioned in a Bull issued by Pope Pasquale II in 1102. Its Romanesque origins are revealed by some structures encapsulated in the façade and the left flank. In the single hall of the interior, two altars with an 18th-century reliquary statue of St. Eufrosino stand against the sides. In the rectangular apse is a stone aedicule where the Saint’s relicts were displayed. The historic scarcity of water in the Chianti countryside resulted in the veneration of a spring that was found here, as indicated by the little chapel behind the oratory, containing a 12th-century stone altar with interesting bas-reliefs, and a hole that must have provided a glimpse of the spring-water. 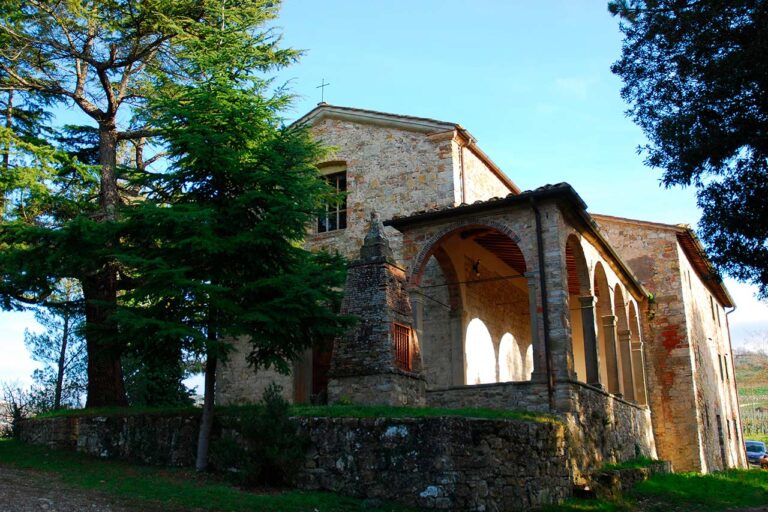 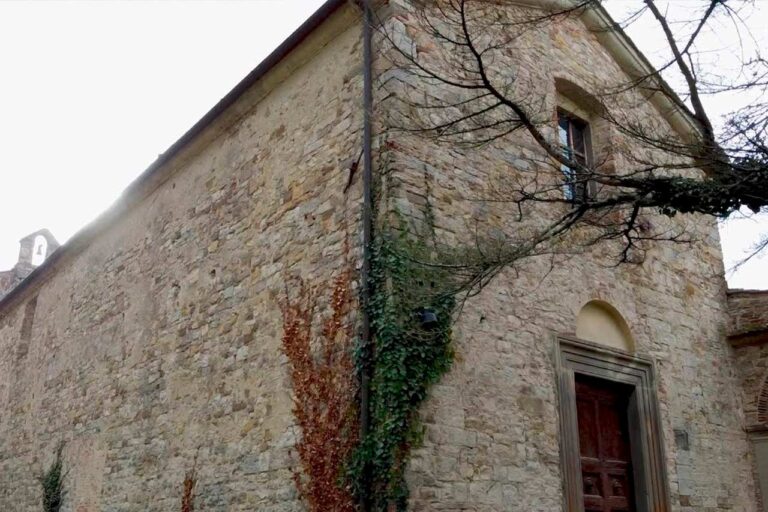 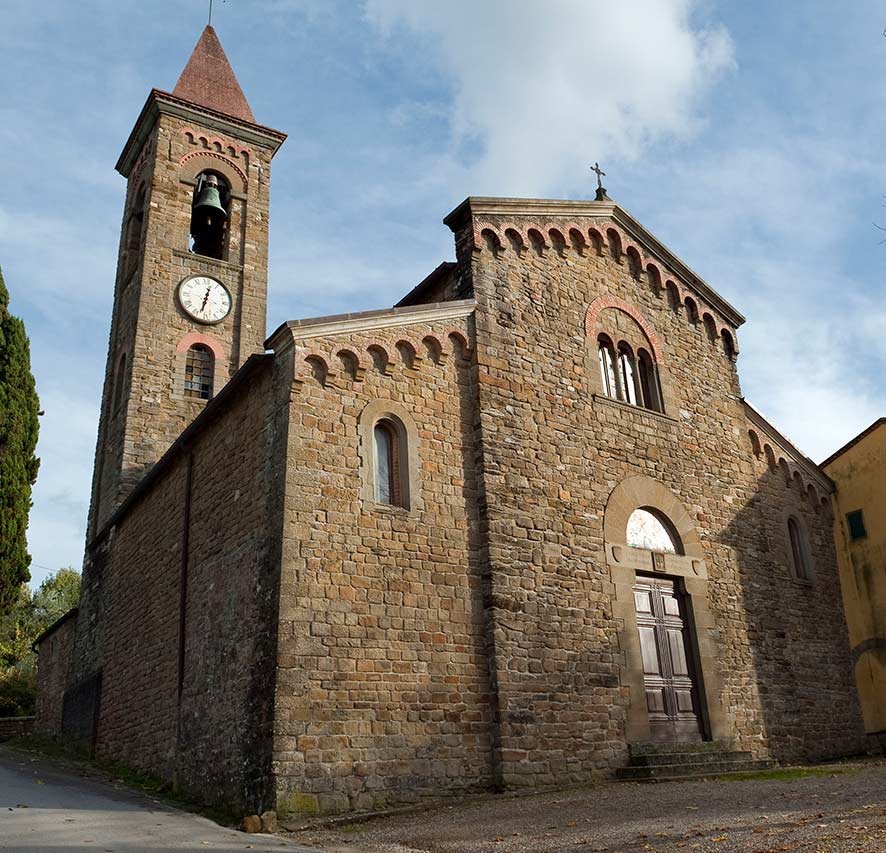 The Pieve appears in the records of Badia di Passignano starting in the early 11th century. A stone plaque in the apse records its consecration in February 1077 by Cardinal Pietro Igneo and by Guglielmo, Bishop of Fiesole. Traces of the ancient Romanesque construction remain on the left side and in the apse, but the 19th-20th restoration has totally transformed not only the bell tower and the façade but also the interior, whose original structures are no longer visible. On the altar to the right is a Madonna of the Rosary, a work signed by Francesco Curradi (1570-1661). On the lunettes and vaults appear 19th-century frescoes representing the Virtues and Stories of a Dominican Saint and Stories of St. Anthony of Padua. The fresco on the cupola, a fictive mosaic Angels in Glory, dates instead from the early 20th century, as do the additions of an altar and a baptismal font in the left aisle.

Historical-archaeological research was conducted from 2000 to 2010 on the hill of Castellaccio di Lucolena, one of the most interesting sites in the Greve territory, also for the character of its last owner, the Ghibelline Cante da Lucolena, condemned three times by the Republic of Florence in the 13th-14th century, the last time along with Dante Alighieri (‘Libro del Chiodo’). The ruins brought to light reveal walls ranging in height from a few decimetres to nearly two meters, inserted in a woodland context.
From the results of this research, focussing on the castle keep to the north and the tower and part of the village to the south, it seems that Castellaccio was built in at least three stages in the Middle Ages. First to be built was probably the tower of the castle keep (11th-12th century), constructed of regular rows of sandstone cut to medium size, with refined finishing. The second stage is represented by rooms of great size to the north, with more irregular walls, built later than the tower, along with the first belt of walls. Significant finds in this area consist of the remains of a furnace for cooking food, probably used in common, and an entrance door. The last building stage probably involved the second belt of walls and another tower, to the south of which is a rectangular cistern built against the wall. In the vicinity of the north tower, Etruscan-Roman ceramics (3rd century B.C.) were also found. Around the south tower, other elements indicate that the site was inhabited up to the late Republican/early Empire period (1st century B.C. – 1st century A.D.) Medieval coins date the use of the site from the 10th-11th to the early 14th century. 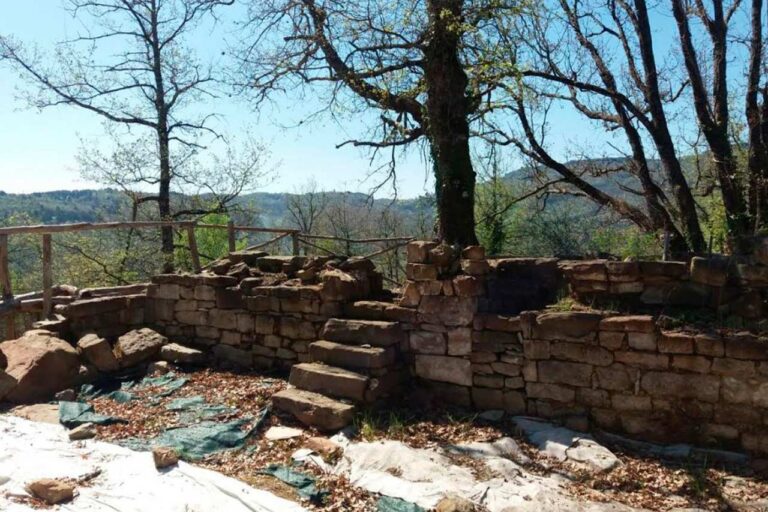 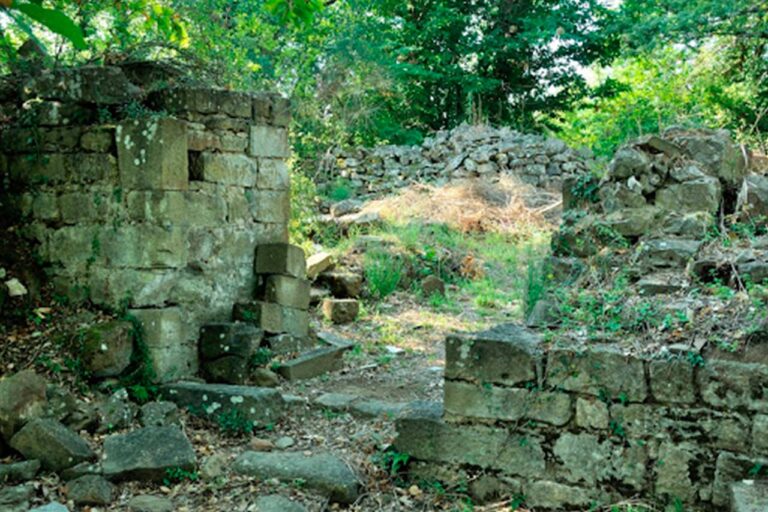