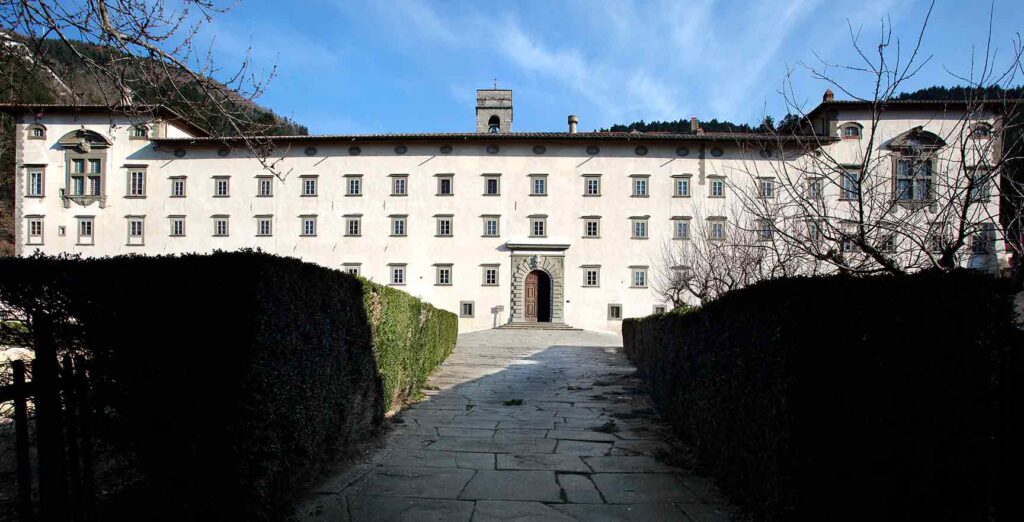 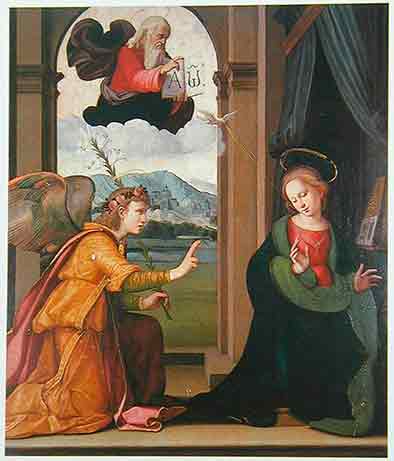 The Pieve, built in the 12th century but extensively remodelled and reduced to a single nave in the 19th, conserves in its walls the remains of the old floor plan with three aisles divided by pillars and a bell tower with two orders of mullioned windows. The tower may have been designed as a defensive structure. Here, in the 14th century, the Blessed Giovanni delle Celle was held captive. Dating from the 16th century is the loggia in the front and the central rose window, while the coats of arms of the Cavalcanti and of Santa Maria Nuova date from the previous century. Inserted in the main altar is a 12th-century relief sculpture of the titular saint. The church also possesses two splendid Annunciations: a 16th-century work attributed to Ridolfo del Ghirlandaio, still in loco, and a 17th-century one attributed to Francesco Curradi, now moved to the new church at Donnini. 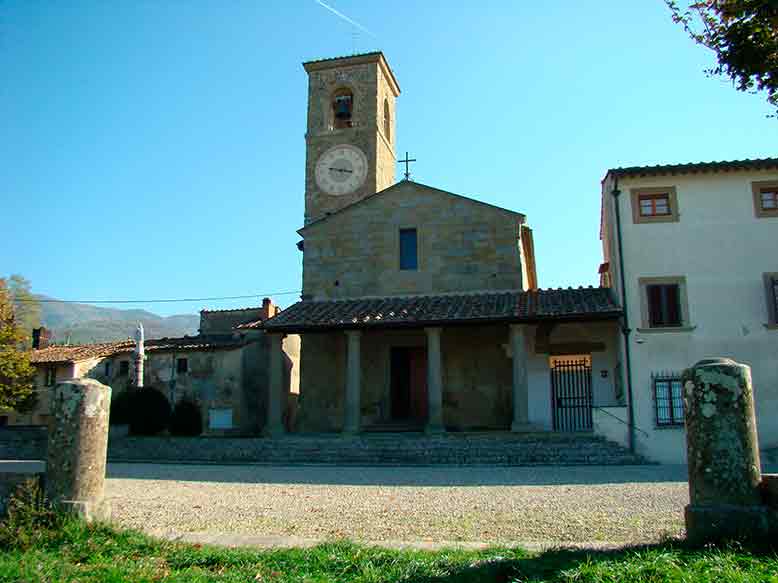 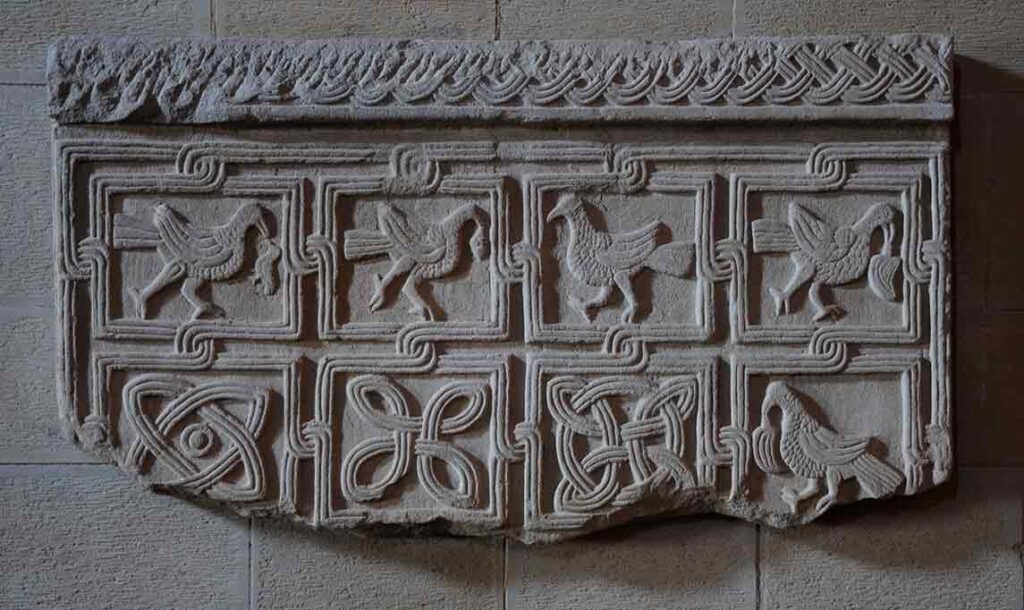 Although the church was first mentioned in 1230, tradition holds that it was founded by Matilde di Canossa. Its Romanesque features (11th-12th century) were remodelled several times in the 17th-18th centuries, but restoration in 1966-68 restored it to its original aspect. Inside the church is a pluteus from the Lombard-Carolingian age (7th-9th century), the tombstone of the Ardimanni patrons (1126), a fresco depicting the Virgin and Child with Saints and an Annunciation (mid-15th century), frescoes representing Stories of St. Agatha detached from the portico, and an ancient baptismal font (11th century) found during work carried out on the 13th-century cloister. The oldest core of the building is the Chapel of the SS. Sacramento, originally dedicated to St. Agnes. In it are displayed the fragment of an ambon with zoomorphic and geometric relief carvings (8th century) and a fresco of the Virgin and Child with Saints, attributed to Raffaellino del Garbo (1497). In the predella appears the figure of the donor, Prior Filippo Alamanni. Liturgical robes, gold-work and the cover of the Chapters of the Compagnia di Sant’Agata are now in the Museo Masaccio. 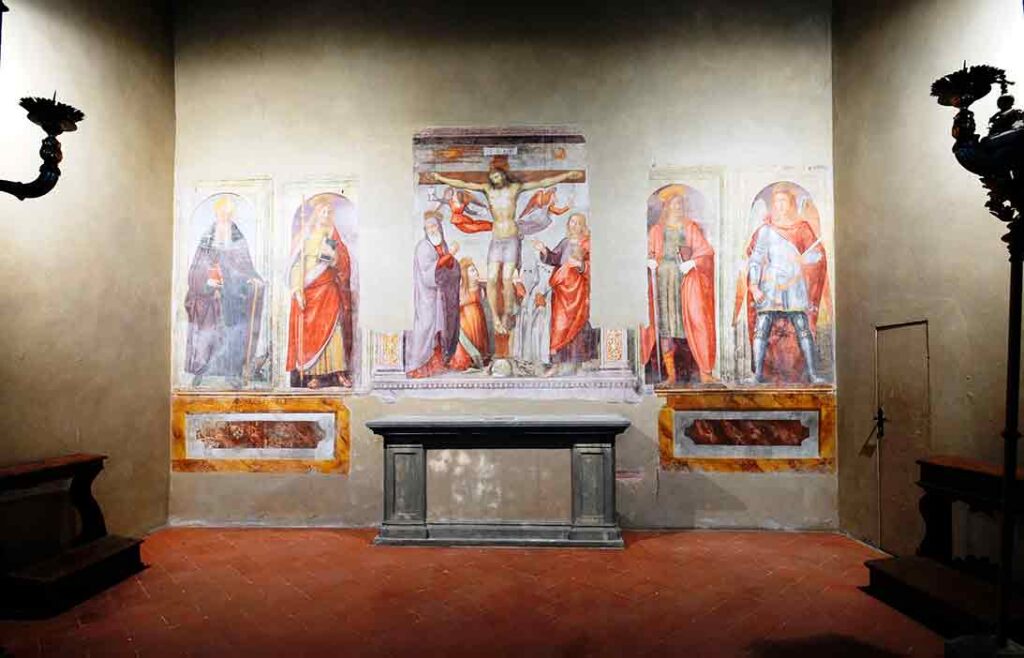 Built as a little oratory in the 13th century, the church was remodelled from the 15th to the 18th century, then restored to its original form in 1972. The simple interior has a single nave with two chapels and the chapel of the Compagnia (‘Tinaia’). Traces of frescoes bear witness to lavish decoration begun in the late 14th century, including aVirgin and Child with Saints by the assistants of Paolo Schiavo and a damaged Crucifixioncoming from the refectory of the Compagnia del Corpus Domini, later the SS. Sacramento. On the left-hand wall a painting of the Virgin and Saints, attributed to Pietro Sante Bambocci (17th century) encapsulates an ancient panel depicting the Virgin and Child. Standing against the right-hand wall is a positive organ, one of the oldest in the Diocese of Fiesole (1697). A door to the right of the presbytery leads to the chapel of the Compagnia del Corpus Domini, which contains a fresco of the Crucifixion and Saints (1516) recalling the style of Andrea Del Sarto. Some silver plate and liturgical articles are now in the Museo Masaccio.

In the remote past, a lake filled the upper valley of the Arno River. Le Balze offer the most fascinating record of this past, bearing remarkable testimony to the geological history of the area (along with the numerous fossils found in the Valdarno). Le Balze are rock formations made of stratified sand, clay and gravel, ochre-yellow in colour, with steep vertical walls soaring as high as a hundred metres, alternating with equally deep gullies. These structures were formed by land washed away by water from the prehistoric lake, and then subjected to atmospheric erosion. Le Balze, occupying a Protected Area of Local Interest, are one of the most distinctive features of the Valdarno plateau.