The monastery was and still is today one of the Vallombrosa Congregation’s most important institutions. The founder of the Order, St. Giovanni Gualberto, traditionally held to come from the nearby Castle of Petroio, spent the last years of his life and was buried here.
Of the ancient 11th-century church, only the crypt remains, the rest having been rebuilt in the early 13th century. Renaissance elements deriving from 15th-century restoration can be seen in the chapter room, the cloister and the refectory, with a Last Supper frescoed by Domenico and David Ghirlandaio. The church was remodelled in the 16th century, when the screen with the altar pieces by Michele and Ridolfo del Ghirlandaio was added; the Chapel of St. Giovanni Gualberto was redecorated, along with the presbytery, with works by the sculptor Giovanni Caccini and the painter Alessandro Allori and assistants. In the main chapel of San Michele Arcangelo, Domenico Cresti, known as Passignano, provided the frescoed decoration and three altarpieces.
After the 19th-century suppressions of the religious orders, the Badia was acquired by the Polish family Dzieduszycki, who added neo-Gothic elements in the late 19th century. The Vallombrosans returned to the monastery only in 1986. 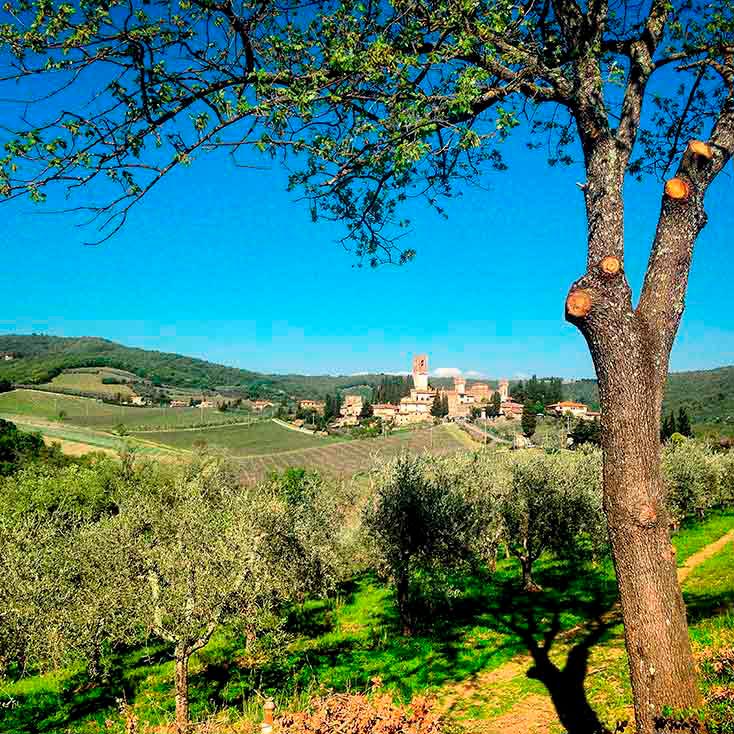 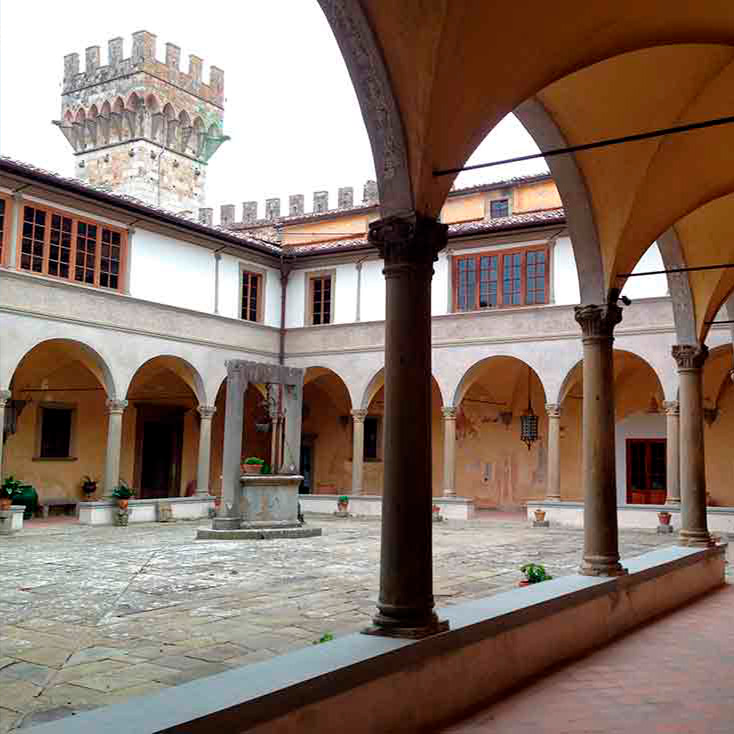 The fortress of Semifonte was founded by Alberto IV degli Alberti in the last quarter of the 12th century at a place called Summus Fons, ‘highland spring’. Around the castle a flourishing town soon developed, opposing the power of Florence but obliged to surrender to it in 1202. The victorious city spared the lives of the people, but not the town, of which only the legendary record of the stone reutilised to build the walls of Barberino remains today. The land where the castle stood was declared unusable by law, but the many fragments of ceramics found on this site, dating from the 14th-16th century, seem to indicate that this order was not always respected. Between 1592 and 1597, at the initiative of Canon Giovanni Battista Capponi, the chapel of San Michele Arcangelo was built. It is a scale replica of the dome over Santa Maria del Fiore, which proved acceptable to Grand Duke Ferdinando I precisely because its shape was another confirmation of the superiority of Florence!
The Semifonte-Petrognano area is currently the subject of archaeological studies.

Legend has it that a group of pilgrims travelling to Rome who stopped to rest here hung a painting of the Virgin and Child on an oak tree, an image that proved impossible to remove. It was seen in 1459 by the Florentine Niccolò Sernigi, who decided to build a church and a monastery, which was occupied by Carmelite monks in 1481. To decorate the three altars, Sernigi called upon the Florentine artist Neri di Bicci, who painted a Trinity and Saints for the main altar, a Lament for ChristDead and a Madonna Lactans with Saints for the side altars (now at the Museo di San Pietro in Bossolo). The miraculous image of the Virgin and Child was stolen in the early 20th century. The church is also decorated with late-15th-century frescoes attributed to Filippo d’Antonio Filippelli and some Della Robbia works in terrecotta, while the main altar was renovated in the baroque period. The outer portico presents frescoes from the 15th-17th century, now badly deteriorated. The lunettes in the cloister were frescoed in 1637 with Stories of St. Theresa of Avila by Antonio Nannoni. 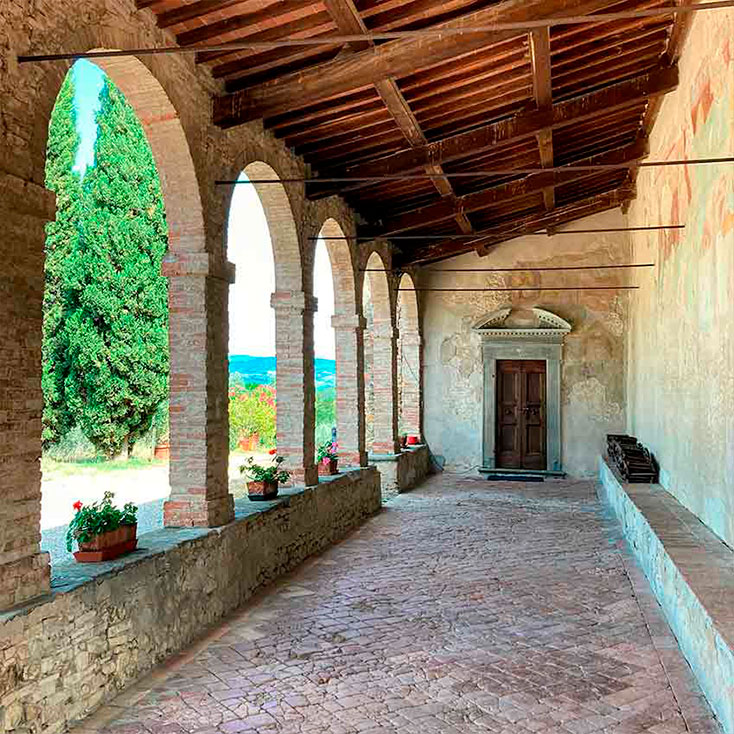 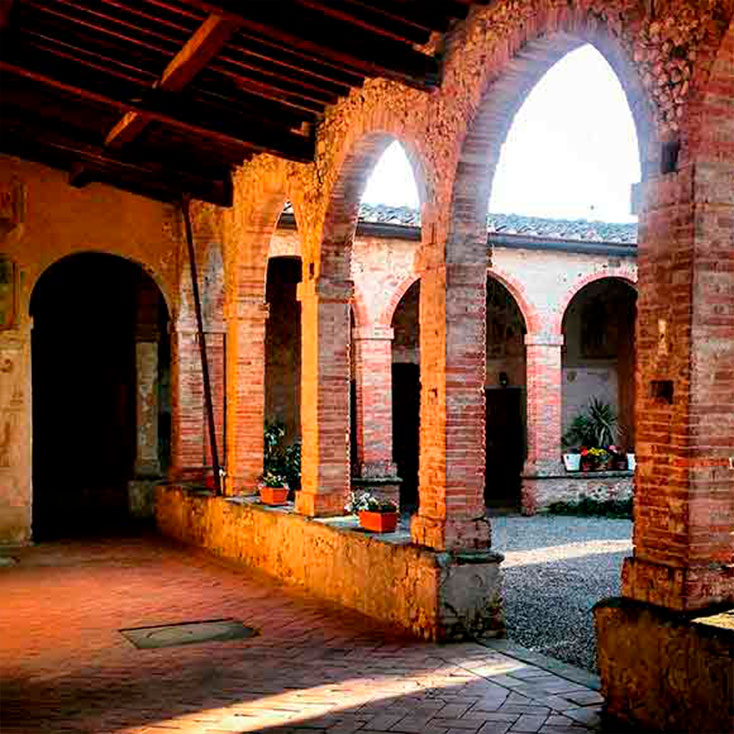 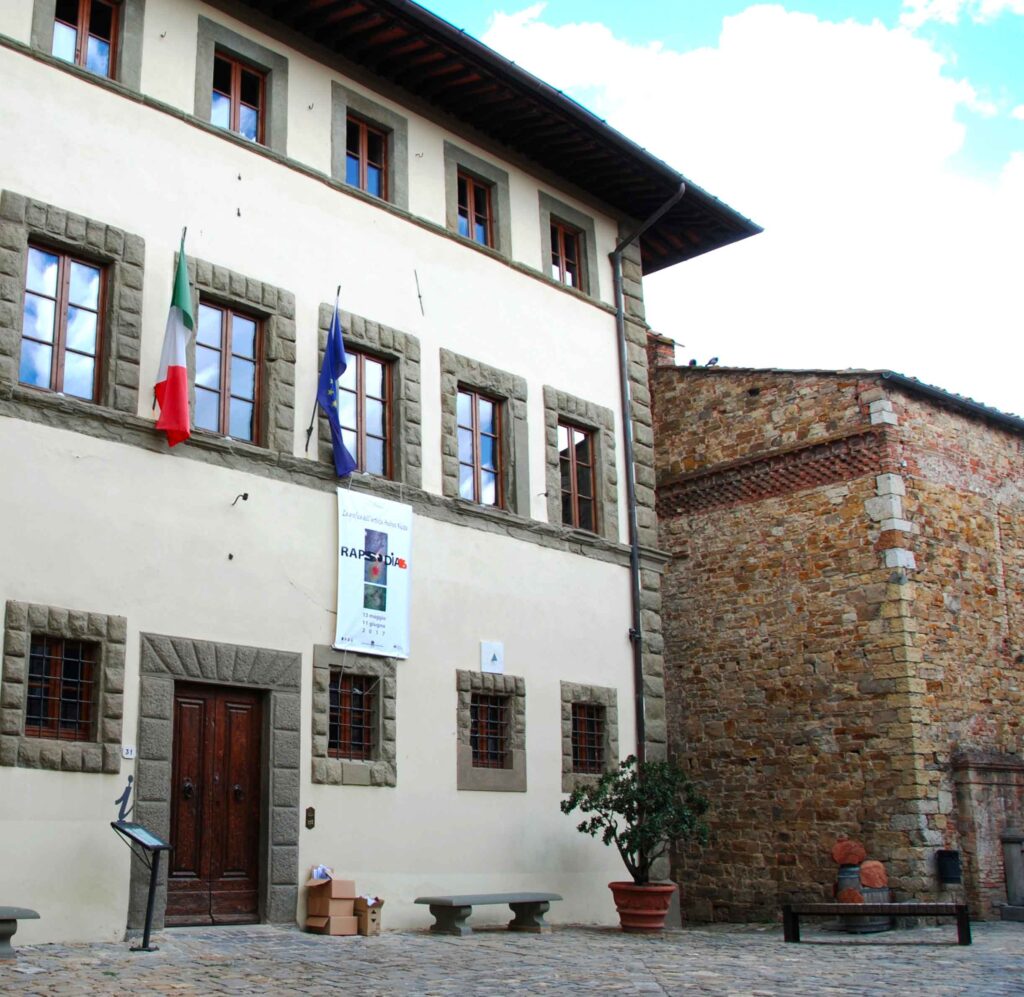 The palazzo was built in the late 16th century by the Ticci, an important family that ran for generations a ‘bottega di stoviglie e pizichagnolo e ispeziale’ (kitchenware, groceries and spices) on the plaza before the medieval castle of San Donato in Poggio. When the family moved to Florence in the mid-16th century, they decided to legitimise their new statusby constructing in their place of origin this lordly palazzo in late Renaissance style, which remained the property of the family until it died out in 1739. In 1740, it was bought by the Marchese Malaspina da Mulazzo. The palazzo changed hands several times in the 19th and 20th centuries, until the town of Tavarnelle bought part of it in 2004. Thanks to recent restoration, the building is now open to the public, being used for temporary expositions, conferences, exhibitions and other events. 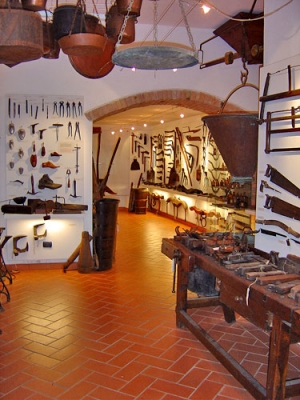 This collection of objects linked to the ancient trades and occupations of the Chianti countryside was donated by Emilio Ferrari (1915-1990). The first section is devoted to trades: carpentry, with a workbench and a set of planes and gouges; shoemaking, with machines for stitching leather, iron moulds to shape the shoes and examples of farmer’s boots and clogs, along with a fine set of pinchers and other tools. The second section deals with the work of farming, with a set of tools used for working the fields and caring for farm animals, along with a horse-drawn buggy. Other sections illustrate the production of olive oil and wine, along with a peasant’s house, furnished with objects used in everyday life.

• Opening Hours: The museum is closed at present.