Two rooms annexed to the Collegiata’s sacristy contain a fine collection of religious art, completing a visit to the church with its beautiful 14th-century painting of the Virgin and Child, St. Elizabeth of Hungary and St. Louis of Toulouse, by the Master of Figline. The museum displays a collection of paintings, church furnishings, gold-work, liturgical robes and illuminated manuscripts coming from the Collegiata and the nearby churches in Figline. In addition to a grandiose altarpiece depicting the Martyrdom of St. Lawrence by Ludovico Cardi, known as Cigoli (c. 1590), coming from the oratory of the Confraternita devoted to the Saint at the Spedale Serristori, is a polyptych representing the Adoration of the Magi and Saints (1436) by Andrea di Giusto Manzini, commissioned by the Serristori family, portrayed in the predella. There is a curious series of polychrome wooden signs bearing symbols of Christ’s Passion, used in the Good Friday procession. 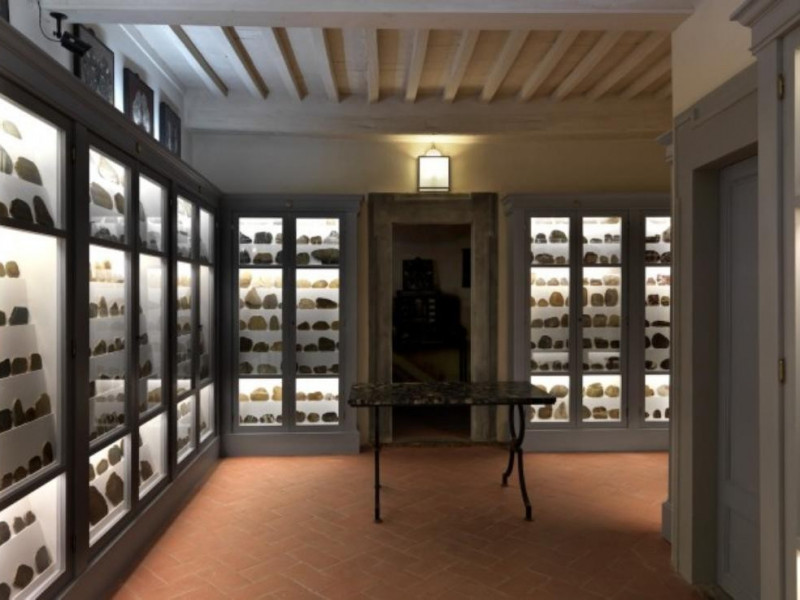 In some of the ancient rooms of the Spedale Serristori, built on the main square of Figline starting in 1399, the antiquarian Giovanni Pratesi has set up an exhibition space around the fulcrum of the former oratory, restored after having been bought in 1987. At this time, the 16th-century altar by Giovan Battista Foggini was restored, along with a 14th-century fresco of the Crucifixionand the distillery of the old Spezieria, or pharmacy. In addition to noteworthy pieces dating from the 16th-18th century, such as the preliminary sketches of Volterrano and Ciro Ferri for the church of the SS. Annunziata in Florence, and that of Giambologna’sChrist the Redeemer, the Foundation displays an interesting collection of stones from the Arno River. 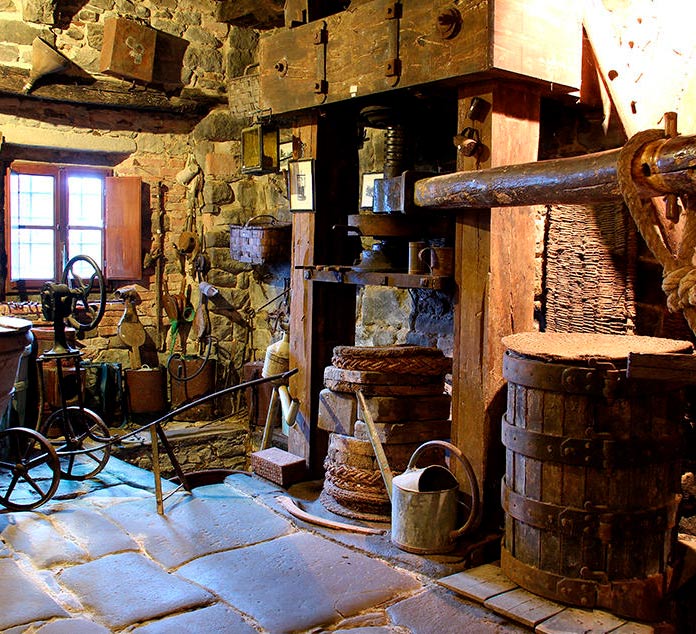 Since 1974, this collection has been housed in the Canonica of the Romanesque Pieve di San Romolo. The exhibits, illustrating life in the Valdarno agricultural community, are arranged in two sections: the theme of work, linked to the productive cycles of the countryside, such as the growing and processing of typical products, along with the domestic activities of spinning and weaving; and the theme of daily life, with replicas of typical rooms such as the kitchen, bedroom and cellar. The museum contains over 6500 pieces. In the courtyard are wagon wheels, rope-making spools, a granite grindstone, a rain-water cistern and a watering trough. The heart of the museum is an stone olive-mill of monumental size dating from 1729. In the dried herbs room is a collection of medicinal herbs. There is also a curious collection of prayer cards and holy images. The collection is managed by the Cultural Association “Museo della Civiltà Contadina di Gaville” (museum of peasant civilization}. 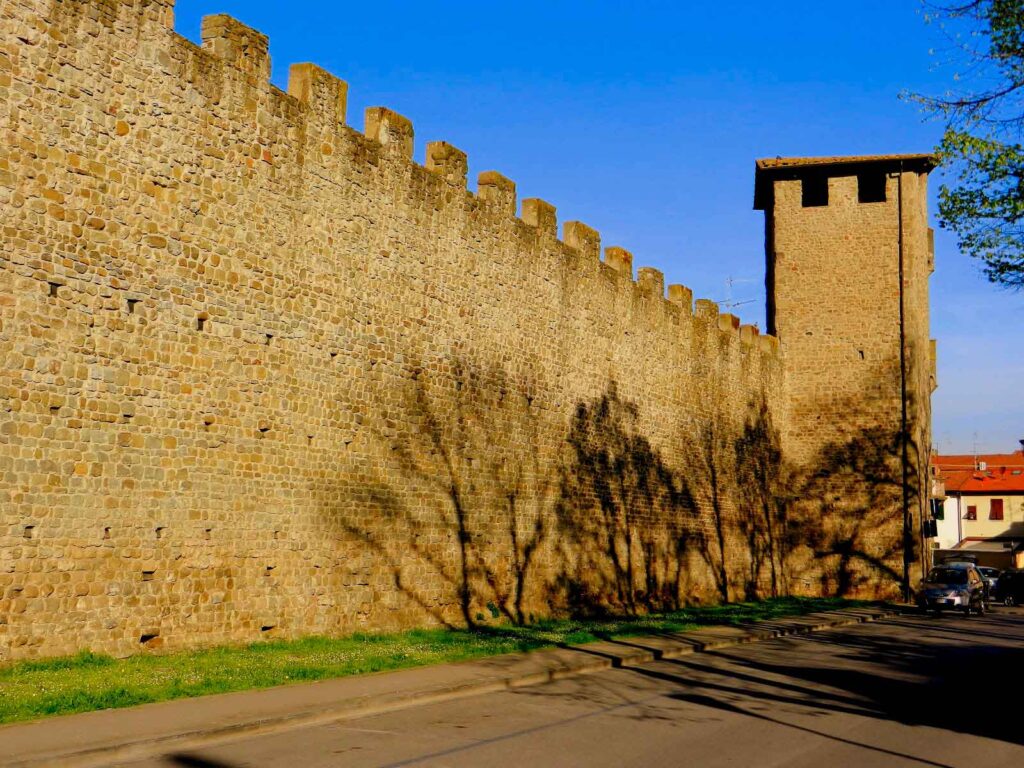 The walls of Figline and Incisa

The town of Figline grew up below a castle that originally stood on a height overlooking the fluvial plain of the Arno River. The castle is mentioned for the first time in a document from 1008. Hotly contested between Arezzo and Florence, it was destroyed by Florentine troops in 1252, leading to the growth of the marketplace at its foot. In 1356, the Commune of Florence started to build the walls that would make Figline one of the Valdarno’s major fortified centres. The belt of walls remains nearly intact today, with twelve towers still standing.

The Castle of Lancisa (11th-12th century) probably stood on a hilltop overlooking today’s town, in the present-day locality of Castelvecchio, dominating the Arno valley, the bridge over the river, the mills, the roads and the town that grew up beneath it. Starting in 1224 the Florentines built the new castle, on the site of today’s Incisa. It was enlarged and remodelled over the course of the 14th century. 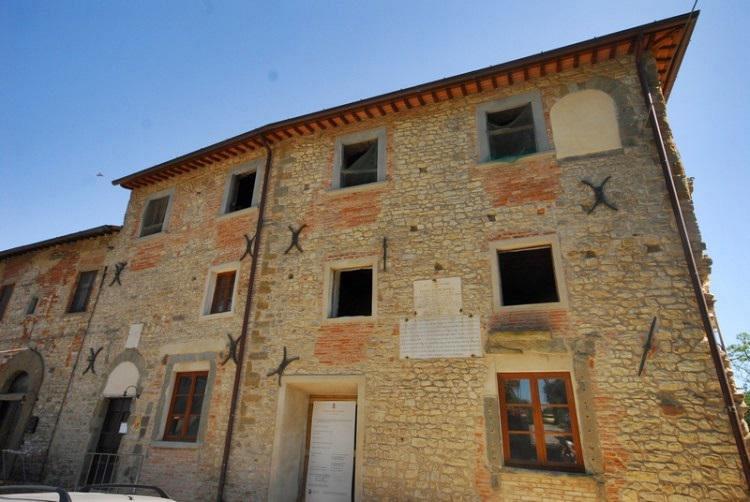 The so-called House of Petrarch consists of three sections that have undergone countless transformations over the centuries, but still show walls dating from the 13th-14th centuries, as well as 15th-centry additions. The oldest part seems to be the right-hand section, the tallest, appearing as a truncated tower. On the right, where the castle walls converged, the anchoring stones are still visible. The central core dates from the second half of the 13th century, while the lower part of the building is a 14th-century structure. It is traditionally said to be the house owned by Petrarch’s family at Incisa, where the poet spent his childhood. 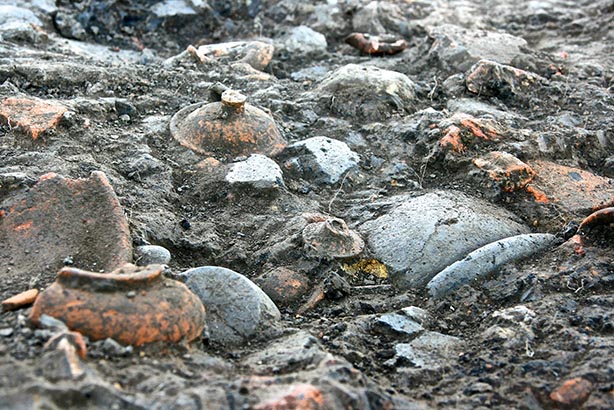 Four archaeological campaigns conducted from 2000 to 2004 have unearthed traces of an Etruscan settlement inhabited by persons of high rank, as shown by fragments of ceramics and remains of fictile architectural decoration that suggest the presence of at least one important building. Equally significant is the long period of occupation of the site, extending from around the VIII to the I century B.C. Since this Etruscan settlement was well inserted in the network of trade between the Mediterranean and southern Etruria, its discovery has been crucial for reconstructing a piece of the territory’s ancient, thriving history.
The site is not open to visitors at this time.