The site of the castle was a fortified centre under the lordship of the nepotes Rainerii, an ancient Florentine family connected to the more powerful Guidi Counts. The little settlement, mentioned for the first time in a document from 1086 ascastellum de rengnano, controlled much of the surrounding territory. Its position, on a height dominating a place where the Arno could be crossed in the system of roadways linking the Valdarno to the Florentine plain, made it a strategic point in a territory claimed at an early time by the city of Florence. The remains of buildings from different epochs unearthed in archaeological excavations show traces of the events that transformed the original lordly castle. The phenomena behind the success, abandonment and transformation of such settlements, little castles that, at the height of the Middle Ages, profoundly changed the appearance of our countryside, are the subject of research conducted by the University of Florence, with the Castelluccio serving as ‘guide-site’. 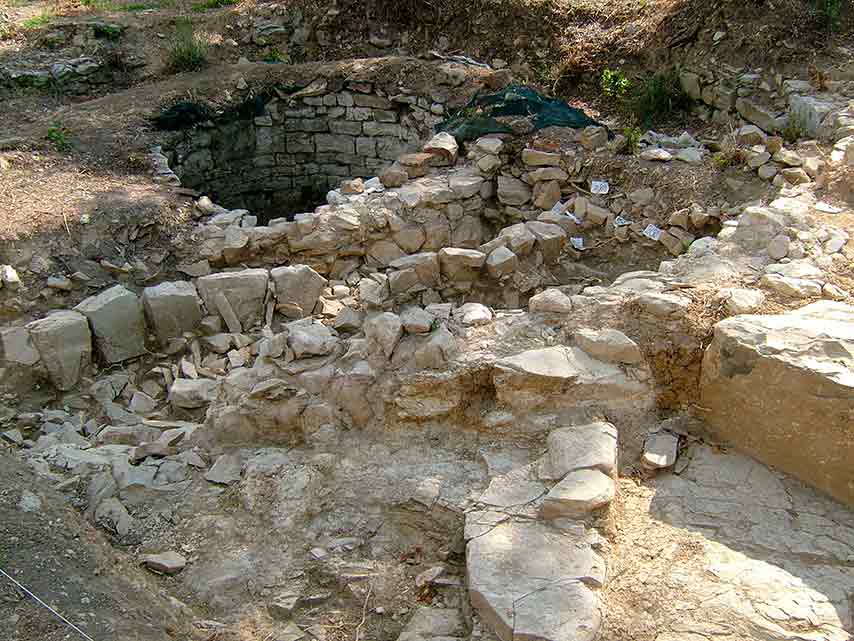 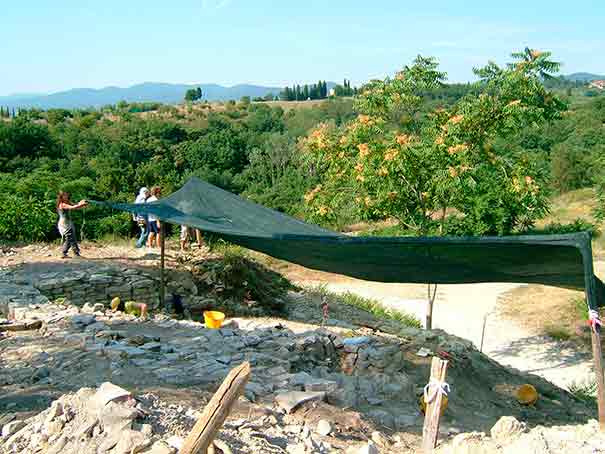 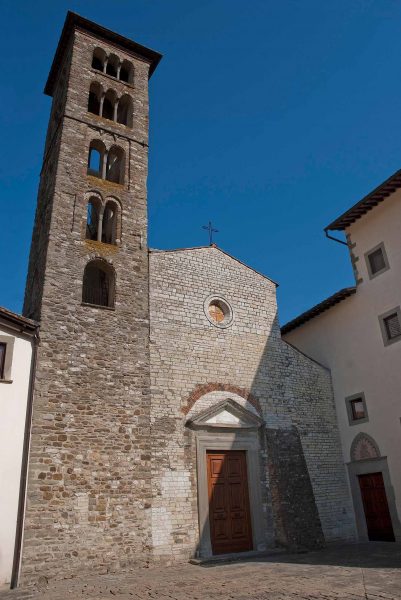 The Abbey was founded as a Benedictine convent for nuns, perhaps in 780. Dating from the 12th century is the renovation of the building (and perhaps its relocation) at the order of the Guidi Counts. The ages-long history of the place did not end with the 19th-century suppressions, since the nuns have always managed to remain at Rosano. Inside the church, in addition to the crypt with its Romanesque inlaid altar, is a great Crossabove the high altar, dating from the 12th century and attributed to the Master of Rosano. Recent restoration has revealed a hollow in the vertical arm that held a relic: a fragment of bone and a little stone cross, like the ones the crusaders brought with them to the Holy Land. Experts have hypothesised that it may have been commissioned when Sofia dei Conti Guidi entered the convent in 1130. She was the orphaned daughter of Guido Guerra, who probably died of disease contracted in the Holy Land. 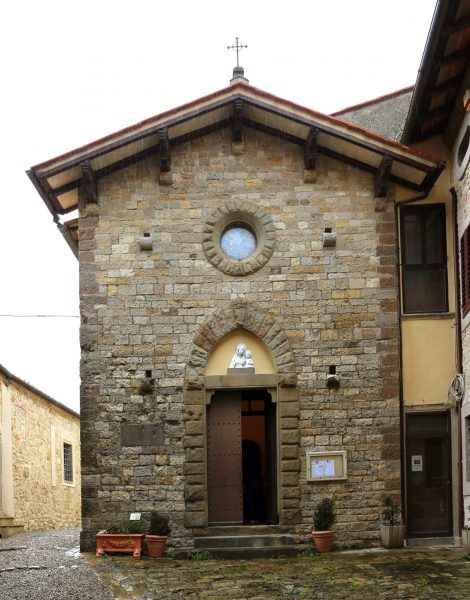 The church probably dates from the 11th century, when a chapel is mentioned in a document from 1139. Its history is closely linked to that of the castle of the same name, which was destroyed and rebuilt, then converted into a villa in neo-gothic style in the late 19th century. The church possesses important artworks, most notably a beautiful painting depicting the Madonna of the Girdle and St. Anthony the Abbot, St. Thomas, St. Francis and St. James attributed to Andrea del Sarto with Rosso Fiorentino and Pontormo; and the Virgin and Child with St. Peter, St. Apollonius and St. Michael byMariotto Albertinelli (1514), commissioned by the patron, Zanobi Della Vacchia. This family also commissioned the painting of the Virgin and Child by Lorenzo di Bicci (c. 1385-1390), originally the central panel of a polyptych. 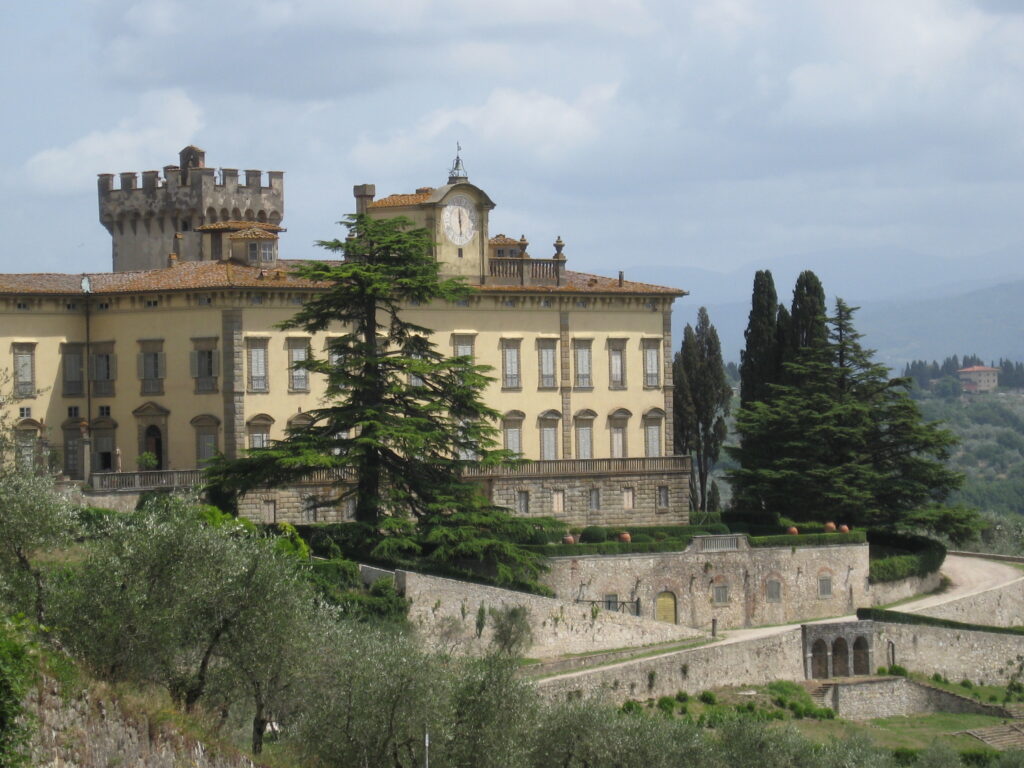 The monumental Villa di Torre a Cona was originally a castle owned by the lords of Quona, then acquired by the Rinuccini family, who kept it from 1373 to the mid-19th century. It is now private property. In the early 18th century, the Rinuccini family began converting the premises into a villa-farm, encapsulating the imposing turret that had probably been the castle keep of the ancient fortress. In 1738, with the work now finished, Fosco Rinuccini held a lavish ceremony for his wedding to Camilla Aldobrandini. The appearance of the villa today results from numerous renovations carried out as late as the second half of the 18th century. The villa, with a monumental facade rising for three floors, stands on a little hill, overlooking a series of descending terraces. To its left are the farm and the wine cellars, and beyond them an impressive Italian-style garden. 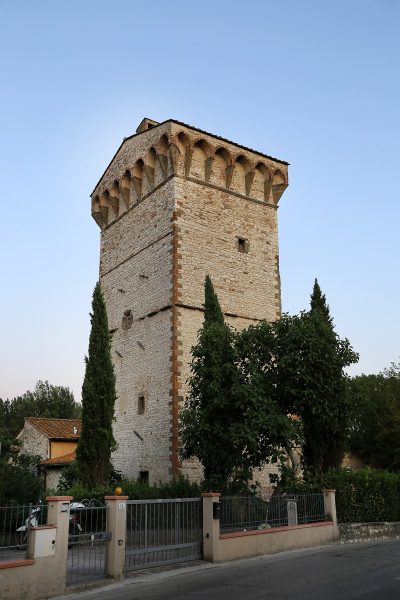 Among Rignano’s defensive structures, the most important is Torre all’Isola, situated on the plain in the vicinity of the Arno. Although recently remodelled, the tower shows clear traces of its medieval walls, arcades and corbels at the top. Evidence of work carried out from the 13th to the 15th century appears in the walls. Some features of the 13th-14th century ‘casa da signore’, or manor house, have also remained: an inner courtyard surrounded by a wall contemporaneous with the tower, with a door entering a group of structures, now whitewashed, clustered around the original core. The cornice of the tower has survived only in part, as indicated by some remodelling done In the early 15th century. The ‘tower or fortress called La Torre a Isola’ was owned by a Florentine called Lorenzo di Totto Gualterotti.